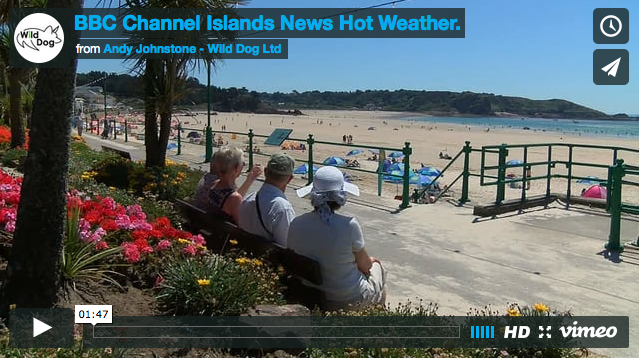 When the BBC calls and asks if you’d like to cover some shifts for Channel Islands News in Jersey over the summer, you’d be daft to say no.

It seems that a significant numbers of staff on the island were either off on maternity leave, on holiday or had been swiped to cover the Olympics in Rio.

As with many regional TV news outfits, BBC Jersey uses video journalists to generate most of their content and this requires a level of multi-skilled-multi-tasking that is all-too common in modern TV news and documentary film production.

The VJ’s in Jersey were using JVC650s to shoot with, which are standard issue now it seems in BBC regional TV. As with many cameras that are built to a price point for ‘run and gun’, there are compromises in the build quality and functionality and it is possible to make reasonable films with these tools, I am not sure I’d be running out to buy one.

My first impression is that while these cameras produce reasonable quality images, they are quite ‘funky’ to work with and I had numerous problems with settings changing, buttons turning themselves on and off and so forth. The viewfinder is very small and the external flip out screen is all but unusable in bright light (as many camcorder screens are). My other bug bear was the audio pots which seem to have been hidden below the flip out viewfinder and require slender fingers to operate them. Low-light and high-light performance is not great – the Fujinon lens has 3 x ND filters, but the smallest aperture is f8, which is frankly 3 stops short of what I would expect on any lens. Very odd, but I suspect this is one of the things that went out of the window when the designers we told what their build budget was…

On the plus side these cameras do have professional audio XLR plugs and the ability to monitor channel 1 only – very handy for interviews. The camera uses cheap SD media and plays nicely with  Final Cut Pro and other NLEs in post production.

Here are two of the films we shot & last week with BBC journalist Julie Flanagan.